As we arrived to Las Escaleras we were greeted by a few dozen people lined up outside the school. There were hand-drawn Canadian and Nicaraguan flags adorning all angles of the hilltop school. I looked to Gloria for clarification but she seemed as surprised as I by the festivities. 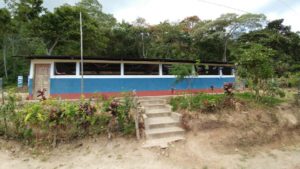 Inside the school was even further decorated and we learned the teachers and kids had arrived at 7:00am to get things ready for the community gathering. There were songs and dances performed by the kids, photos of past SOS volunteers shown, then speeches presented by students, parents, teachers, and the local municipal representative.

They spoke about what the school — sponsored by SOS and ANIDES four years ago — had meant to them. Previously the only facility they had for classes was a small shed that had been offered up by a community member. Later I would see it for myself; the near darkness from the total lack of windows, the cramped space which had also simultaneously doubled as a home to chickens and pigs alongside the kids; the rotting wood that showed the impact of the rainy season.

The community knew it was not a space fit for learning, but there had been little other option. This was a region driven by the coffee industry, with most its population working the fields on behalf of wealthy landowners (many whom were ex-pats). From Gloria, Luis, and the ANIDES team, I learned much about the conditions that supported my $3/cup daily joe. Whereas a pound of the crop sells for about $10 on the world market, a local producer would be likely to earn about 25 cents of this (eg. 2.5%). Even if the workers could somehow manage to pool resources to try to start a co-operative, the industry often blacklisted any one who tried. The end result was a community that worked 6 days a week for pennies an hour, trying just to pay off the tin shack houses that had been mortgaged to them as part of their employment. 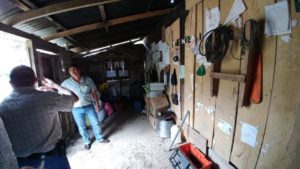 This context allowed me for the first time ever to truly understand the value of a basic primary education. Though a grade six graduation was unlikely to open up major new job prospects on the global market, the basic literacy enabled self-determination and wellness in the community. Here, where the majority of parents were illiterate, they spoke about how their kids could now help them read the Doctors’ prescriptions. How they could now sign documents with a signature instead of a fingerprint and understand what they were signing.

There was also now a forum to educate these potentially vulnerable youth who were sometimes the victims of human trafficking (such had been the tragic case with a member of the community who had been found the week prior). Reading and writing, and awareness of what existing beyond their highlands, opened up a whole new world of possibilities for these folks. It seemed to be for this reason they had gone to such great lengths to organize the community meeting. 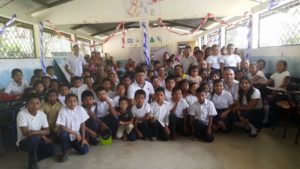 There we also discussed their future visions, goals, and needs. Much like we had seen in Pueblo Viejo, the improved infrastructure had led to a quick rise in the demand for education. Many students had to walk six kilometres through the mountains to the next school to accommodate the overload. The school had seemed to spark a new sense of possibility within the community and together we had to help continue to nurture its potential.