When Eddy began teaching in Los Limones 19 years ago, he supported the whole community of 72 students, teaching grades one through six simultaneously, all within a single classroom. It seemed superhuman to me, though I was told it was quite common in the rural highland regions of Nicaragua.

I couldn’t imagine how Eddy could’ve managed it. Yet, he offered a modest explanation. He described his method of delegating specific students within each grade to teach one another, while he focused his own attention on the youngest students to help those who needed it the most. I imagined it could not be as simple as he made it sound.

With the construction of two new classrooms since then (supported by SOS and Anides) he was now able to share the load. But still he had kept pushing for improvements, coordinating local parents to build a new retaining wall to prevent floods on the school grounds during the rainy season, and setting up a fence to prevent local farm animals from interrupting lessons. He was a living example of the patience, perseverance, and resourcefulness needed to make education work in these regions.

His superhuman status was further affirmed when I learned that during student vacations, instead of taking time for rest, he went down to Costa Rica for two months every year to pick coffee to earn extra income. It was what had allowed him to purchase the motorcycle that saved him the 1 hour commute the kids still had to make each day.

His hope now was to build one more classroom so the pre-school students no longer had to learn within the room designated as the school kitchen. 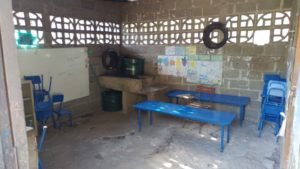