My time in both communities unfolded over 2 days on two Experience Guatemala Tours. Please read part II of this Community Profile series here.

The first tour was a hybrid tour that included visiting; NDG’s social business the Good Hotel, the El Povenir School, a worry-doll making workshop, a chicken bus factory, the Nuestro Futuro schools, a coffin making business, and many chicken buses in between. 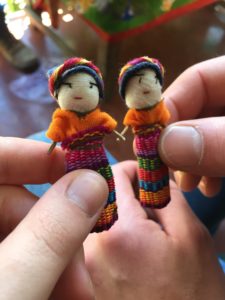 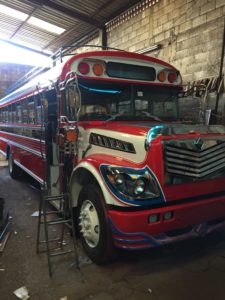 Ciudad Vieja unfolded quickly and we might have missed entering it had it not been for the chicken bus that got us there. To travelers without the guidance of an Experience Guatemala Tour, one might think entering Ciudad Vieja is simply an extension of Antigua, but there are distinguishing characteristics.

The majority of the inhabitants of Ciudad Vieja are dedicated to agricultural activities and under 10%, mostly women, create and sell artisanal goods to sell in Antigua.  A small percentage of the town’s inhabitants work in a professional position requiring an advanced degree or specialized education. Many women do not have official jobs but earn money by making tortillas, washing clothes, or cleaning houses. It’s a stark contrast to Antigua, which is bursting with language schools, tourists, international restaurants, and more.

Our itinerary transpired seamlessly, with our tour guide Christian and NDG’s Volunteer and Groups Manager Carlota leading the way. They gave the group first hand stories and insights a traveler would not get from a guidebook or another provider. My first Experience Guatemala Tour laid the foundation for subsequent tours and conversations with NDG. 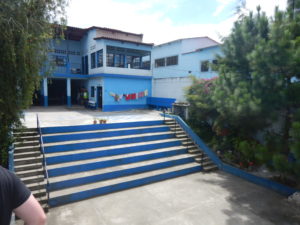 It was a packed day, but I truly wouldn’t have had it any other way. It represented what I later realized was already happening in San Lorenzo del Cubo and Ciudad Vieja: the communities are bustling. And we need to catch up.

Bustling doesn’t mean a large city with fast cars and bright lights. But rather, possessing a certain attitude. One in which community members are going to put every ounce of energy and minute of time into taking community development into their own hands.

For many SOS Outreach Trip volunteers, their initial idea of what a partnering community will look like is a stark contrast to what is actually going on. Sometimes there is an expectation that SOS’s involvement is the first intervention, or the first opportunity that a community has taken to increase their access to education. I believe what is most surprising for SOS volunteers is finding out that this isn’t true, and witnessing the energy and efforts of communities long before SOS’s involvement.

My first Experience Guatemala tour, which was my first time in both Ciudad Vieja and San Lorenzo del Cubo, confirmed this for me too because, even after years with SOS, I still find myself excited and motivated by the energy in our partnering communities.

I got to witness this energy and attitude even further on my next Experience Guatemala Tour. Continue my journey in Ciudad Vieja and San Lorenzo del Cubo here.