Despite being a short distance from Antigua and Ciudad Vieja, once you enter San Lorenzo del Cubo you immediately lose the fast pace atmosphere of a larger town. Our second tour was especially more relaxed as we had become well acquainted with our guide Christian and NDG’s Volunteer and Groups Manager Carlota. Now, coming together to begin the tour felt like catching up with old friends. 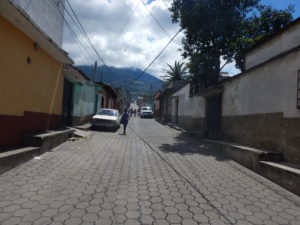 Because San Lorenzo del Cubo is considered a municipality of Ciudad Vieja, individual statistics are difficult to collect.  Like Ciudad Vieja, inhabitants of the area work primarily in agriculture, and some, mainly women, create and sell artisanal goods in Antigua. A small percentage of the town’s inhabitants work in a professional position requiring specialized education. Many women do not have official jobs but earn money by making tortillas, washing clothes, or cleaning houses. Children often assist their families in the home, the fields, or in small family businesses.

We start the tour with confectionary making at the home of our tour guide Christian with his mother and eldest sister taking the lead. We cook shredded coconut and sugar, roll dough, form it into shapes, and share a lot of laughs. In their home, hearing about their day to day lives and plans for the future, sets an Experience Guatemala Tour apart from other attractions offered in Antigua. It is far more intimate as their team literally opens the doors of their homes for you. 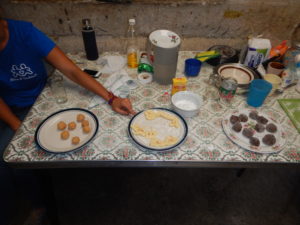 Next stop: coffee tour. We take a chicken bus to San Lorenzo del Cubo to meet Carmen, her husband, and her son, of Café Carmen. We meet in the town’s square and walk to the land where the coffee beans are grown, and then back to her home to demonstrate the roasting and grinding process. Witnessing coffee from bean to cup was unforgettable.

After this day, the impact NDG has with their emphasis on entrepreneurship and education became completely full circle. Not only does NDG embody an entrepreneurial spirit through the their schools and social businesses, but they make a distinct effort to foster the strength of neighbouring entrepreneurs by working directly with them for their Experience Guatemala Tours.

Cafe Carmen is just one example of this. Carmen has been in the coffee business since she was a child and has taken her family legacy and helped grow it into a thriving business. While walking to the coffee plants, Carmen described her role within the coffee cooperative and her latest opportunity to train with a branch of the Guatemalan government on how to expand her business. One such way for growth is with the tour in which we participated. She found NDG online and applied to be on of their partners, and we were the third group to participate on her tour. NDG expressed their excitement for this new partnership, as they are continuously looking for new entrepreneurs to partner to with. They recognize the positive impact this can have on the communities and their entrepreneurs themselves.

As we celebrate SOS Outreach’s 10 Year Anniversary, it is my hope that we can commit to communicating the vigor of our partnering communities to our Canadian collaborators. We, as a Canadian network, need to aspire to listen to those directly impacted by our partnerships and use their energy as a blueprint for what can be achieved.