In  the month of February 2015, during my one week study break, I got the chance to participate in the most amazing adventure in the world. It may not be on everyone’s to do list, but it certainly was on mine. As a university student trying to obtain a Bachelor’s degree in Science, I am not able to get out much. Since this was my last year of university, I decided why not apply for Alternative Spring Break where I am able to help build something amazing, learn about another culture and just immerse myself in the beauty that Nicaragua had to offer me. I want to highlight five amazing moments that occurred and not in order of which was best.

The night of February 14th,  we all gathered at school  to meet and take the bus to the Montreal airport. Watching everyone come through the door one by one or two by two with smiles on their faces was exciting. We all shared our excitement and nervousness and got on the bus towards Montreal. We got to the airport around 1 am and our flight was leaving at 6 am.. thus we had lots of time to waste. So why not play card games, while we wait!? or even better use the heads up app!? All those games were a blast and has us laughing and distracted while we waited.

So we then boarded the plane and arrived in  Miami and guess what? Another layover this time 7 hours!! .. but that’s okay more team bonding! We each took turns going around this massive airport and looking for food, and then more bonding while we ate our food. One of our team members had the most genius idea of doing a photo scavenger hunt in the airport! There were a total of 15 items we had to take pictures of and we separated into 4 groups. That was the most fun I have ever had in an airport and it definitely eased my anxiety over flying since I was not just sitting there thinking about flying. I’m thankful for both layovers as it definitely allowed us to bond as a group.

It started from the moment the plane landed in Nicaragua, where we were able to descend the plane and walk on the tarmac. Walking outside of the airport and smelling the fresh air was breath taking, as well.  The drive to our hostel was very scenic as we got to see these bright orange trees that covered the city as well as various shops, including Subway (fast food) but with spanish advertisements. The scenery continued the next day when we drove two hours from the capital, Managua, to Laguna Seca, a small village. The drive involved a lot of mountain scenes, coffee industries and animals such as cows, horses, etc. There were times where we thought our bus wouldn’t make it up all the hills but we did somehow. The best scenery of all was when we arrived at our destination, la escuela Laguna Seca and saw all the children sitting in their chairs with smiles on their face waiting to greet us. That’s when we knew, okay this is going to be awesome! Also I should mention seeing the waterfalls (La Cascada Blanca) , doing yoga in the mornings with the mountain scenery behind us and going to a river to bathe was also beautiful.

The tools we used to dig holes was intelligent and interesting. We were required to dig 1 metre holes and we used shovels, of course in Canada for a job like that you would use big machines and that hole could be done within an hour or two. It took us 2 days to dig two 1 metre deep holes along with four other holes to built sinks. We also used these long metal rods with two different ends on it to break the various and great amount of rocks we had to dig out. It was also interesting to see how they mixed cement, they did not have a barrel to mix it with, they just made a huge pile, made a bowl like shape and poured water in the middle and mixed the cement. The local volunteers that helped us were very efficient and smart in how they used different tools. Also, we found out the local volunteers are the parents of the children who attended that school, and were not hired to be there, however the organization still paid them. Nice to see parents getting involved in their kids education life by helping build the schools and aiding the education system. 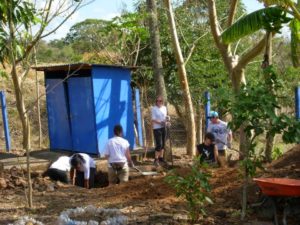 Throughout this trip my definition of community had changed. Before I always thought of community as a group of people who had a particular characteristic in common, which was living in the same place. This community service learning trip allowed me to see that is so much more than that. The community of Laguna Seca were all family, and they treated us just like one of their own. Our host family who cooked our all of our meals was exceptional. All though there was an obvious language barrier we were still able to communicate and they were very warm and inviting to us as we were to them. I can’t even describe with any words, how amazing it was to just fit in and talk to anyone and everyone. In Canada the most we do is smile at strangers, but if someone were to randomly come up and talk to you, you’d think they were creepy. However, in Nicaragua the community was so close with each other and everyone was just so friendly it was not creepy at all. Every morning we’d meet new people who said Hello to us, all the kids (even those who didn’t go to school) came and hung out with us. Some of the local boys that we met also wanted to show us around so they brought us on a fun little hike down to a river with the most amazing scenery.  While we were there a member of our host family had lost her boyfriend and it was a very sad time, we learned that they celebrate the individual’s life for 9 days straight, full of celebration and food. Every time we had our meal time, she always was came back to be with us and we respected that so much. She felt like if she wasn’t there she would be disrespecting us, and no words can describe how we felt hearing that. It was a hard time for her but she still wanted to be a good host. 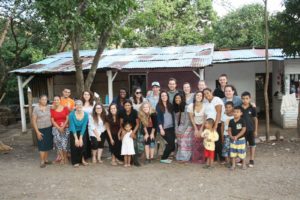 Overall, community service learning is one of the best trips you could take in your life. I would recommend it  to everyone and anyone. I want to thank Students Offering Support (SOS) for being an amazing organization, ANIDES organization in Nicaragua, Carleton University (My soon to be alma mater), Student Experience Office (SEO) at Carleton, All the Team Leaders and Team Advisors and all my new friends that were on the trip.