And there I was, still so young and naive that buying textbooks with the intention of actually reading them was about as conscious a decision as willingly sporting Osiris’ was.

First-year university is the cat’s hairball of life. It’s soft, cozy and deceivingly cute. But also has hair in weird places, probably smells and is almost as confusing a thing as uncomfortable parents explaining where babies come from for the first time.

SOS’ Outreach Trip was the binder to my scrambled papers in first year. Since on a daily basis, my mind contrived three thought waves:

SOS was there to help me understand two of those three things a little further. I still haven’t a clue what I’m doing with my life.

As the trip hurried to home-time and the post-trip mental throbbing stymied the ol’ noggin’; understanding the effects the trip had on me transformed unidentifiable feelings into a state of productive and tolerable reverse culture shock.

This lead me to a virtuous epiphany of why anyone would hop on a plane with 10-plus strangers, united by SOS.

Even if all of these reasons don’t smack you in the face with truth, at least one of them will. That’s the glory of these trips: multiple people chasing success through one common goal – helping others.

Regardless  of your desired industry, you will encounter things that will indirectly influence you professionally.

First off: if you think you know what you want to do with your life – that’s cute. There is a very good chance an Outreach Trip might throw a lovely, constructive wrench in your plan.

It would be inaccurate to say that the trip entirely changes ideal career paths – but rather helps them flourish into a multi-faceted path which can encompass more than one may have thought.

“The SOS trip made me realize that I really like interacting with people,” says Cathy Li, an SOS Outreach Trip participant who travelled to Costa Rica in May 2017.

Cathy majors in sociology and environmental sciences at the University of Toronto. She said that before the trip, she really wanted to be a politician to change things, but after experiencing the trip, she realized that she can change the world by utilizing different tactics.

“My goals are more aligned to global projects rather than just politics,” she continues, “I want to be able to plan for projects and invest time and energy into the world.”

Although Cathy admits that various experiences can provide you with a professional epiphany; she still reflects on lessons learnt on the trip, “Any profession that allows me to care about something so much is a profession that is worth changing [for].”

“You are mentally and physically pushing yourself to an extent that is generally out of the norm.”

Recent graduate Vyishnavy Venkatesh went on an SOS Outreach Trip at the end of her fourth year at Ryerson. She sums up the challenges and recognizes the obligatory perseverance perfectly:

“You are surrounded by a bunch of strangers with no furniture,” …. Accurate.

Aside from the obvious challenges, such as language barriers, physically demanding work and other obstacles with the new community and culture, Vivi touches on what it’s like to live and deal with the other trip participants: 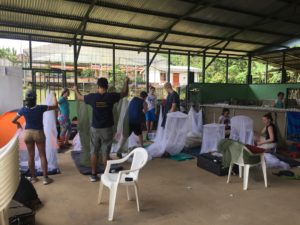 “Living with 14 individuals was very challenging. I’m an only child. You can hear the clock ticking in my room, that’s how silent I am. [On the trip] there is not a moment in the day where there was pure silence,” (probably talking about me).

“I remember I was trying to meditate one night and all I could hear was a heated discussion about religion,”

The trip made Vivi think on a deeper level about the life we live in Canada: “When I came back it helped me change how I saw and reacted to things. Things that usually aggravated and annoyed me didn’t seem like an issue anymore.”

“When you’re in a community like that, you can’t act or think the way you would in Canada. It just wasn’t possible,” She continues attempting to explain the phenomena, “I don’t know how to put it in words. It just didn’t seem like an option.”

It all boils down to this – “I was put in a situation where I had to adapt.”

This one is all about the main goal of SOS Outreach Trips, which is to build educational infrastructures through their 360 model “Raising Marks. Raising Money. Raising Roofs.”

SOS thrives on the idea that national and global prosperity is dependant on quality education for the youth of our world. So many volunteers take this chance to join Outreach Trips because they feel like they need to do “their part.”

Just helping the people of developing countries is a very rewarding accomplishment for the citizens in more developed nations. Evidently, being able to watch the children play, learn and grow in a place you are currently working to help better, is truly a noble experience.

During my second Outreach Trip I visited Escuela de Quizarrá in Costa Rica. The lovely people of Quizarra threw us a ceremony and treated us to a dinner with the community following our hard work on the classroom. 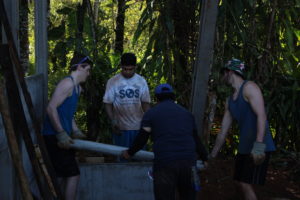 As we were standing with the national anthems of our respective countries, Principal Freddie and his colleagues handed out tokens of their appreciation, such as pieces of thin wood, carved into parrots and other wildlife found in Costa Rica. Following a speech by Principal Freddie, were students of every grade sauntering over to the volunteers to give us hand-drawn pieces of anything their budding minds could surmise.

“We have a saying here: our army is not made of soldiers, but of children going to school,” said Principal Freddie through our NGO and translator, Sterling.

The slickest thief in the world couldn’t rob that moment from me or any of my fellow participants.

…. The number one chore on everyone’s to-do list – just beating out handing in that term paper that was due five minutes ago.

I can’t quite place my finger on what triggers the“finding yourself” portion during the Outreach Trips – but it is essentially a constantly developing aura of spiritual puberty.

It varies from one individual to another. So whether it’s temporarily residing in the middle of a rainforest, walking outside your front door to a street musician greeting you with song or even wondering why you haven’t pooped in four days – it seems to make life a whole lot more tolerable. 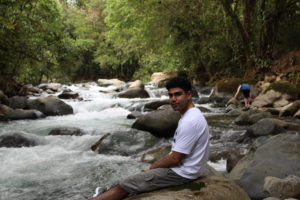 “You can discover yourself, you aren’t playing by society’s rules.”

Trip participant Tamish Multani was able to see another way life can be lived – aside from the rules he thought he had to follow.

“I had the mindset that there was one way to do things,” he says, “In Costa Rica I saw a whole new version of how something could be run.”

Tamish had to accompany another participant on a journey to the hospital to aid an injury. When they arrived, he couldn’t help but to be astonished by his surroundings.

After opening up to the strange setting, he discovered how amazing, talented, intelligent and kind the people in the hospital were.

Understanding that not everything needs to look a certain way to be accepted and prosperous was his lesson: “Be open to whatever you’re going to see.”

So hey, maybe I was wrong … it’s the constipation as well as seeing hospitals. Point is, you never know what will do it for ya’.

For first time travellers with the itch for getting away from reality for a bit, the Outreach Trip is practically a one-stop shop for all the necessary goodies of travelling.

Simply put: Being with others that come from all different backgrounds of travelling experience, will be the After Bite to your travel-bug bite.

No conclusion needed, you probably haven’t even gotten this far because you have already started your application.

David Venn is among SOS’s most decorated -and dedicated- volunteers. He has participated on two Outreach Trips, one to Guatemala with Ninos de Guatemala and one to Costa Rica with Reto Juvenil Internacional. For the latter David volunteered as the SOS Trip Leader, leading the group of 13 volunteers for the two week journey. In preparation for his trip to Costa Rica, David was the Vice President of International Development at Ryerson SOS and played a lead role in ensuring the trip’s completion and success.